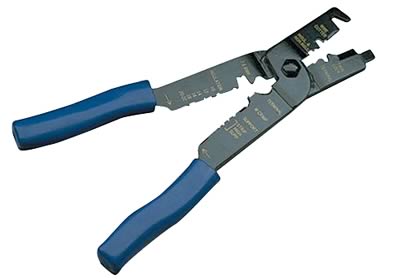 With their heavy insulation, grounded barriers, and strong rip-prevention weaves often built into the casing, spark plug wires can be a royal pain. There aren’t many strippers that can easily handle the tough casings, but there are plenty of options for crimpers.

The unit above retails through Summit Racing Equipment and is manufactured by Taylor. The design doesn’t look terribly robust, but the $16 asking price isn’t bad. If that doesn’t seem like a decent value, there’s a pair of simple cast-aluminum blocks made by MSD which contain a jig for stripping plug wires with a razor. Put the two pieces between a vise’s jaws with a terminal in between, and they turn into a crimper. And that little doodad runs for only $7, which is close to cheap-ass tool territory.

The high-end option comes in the form of dies for interchangeable-jaw crimpers. The exact model will depend on the crimper you own, but they usually retail for around $30. This model [What’s This?], from SG Tool Aid, is a good example.

This website uses cookies to improve your experience while you navigate through the website. Out of these cookies, the cookies that are categorized as necessary are stored on your browser as they are essential for the working of basic functionalities of the website. We also use third-party cookies that help us analyze and understand how you use this website. These cookies will be stored in your browser only with your consent. You also have the option to opt-out of these cookies. But opting out of some of these cookies may have an effect on your browsing experience.
Necessary Always Enabled
Necessary cookies are absolutely essential for the website to function properly. This category only includes cookies that ensures basic functionalities and security features of the website. These cookies do not store any personal information.
Non-necessary
Any cookies that may not be particularly necessary for the website to function and is used specifically to collect user personal data via analytics, ads, other embedded contents are termed as non-necessary cookies. It is mandatory to procure user consent prior to running these cookies on your website.
SAVE & ACCEPT